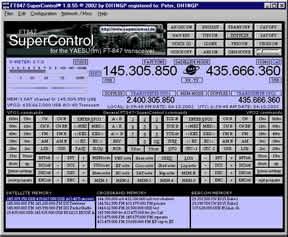 - Full TCP/IP network remote control of the transceiver. It is possible to start the software either in Server or Client mode.
So it would be possible to control your transceiver in rel time via local TCP/IP networks or also via Internet, without the use of third party remote control software.
This function has been updated for Voice over IP (VoIP).

- Open memory database with an unlimited amount of possible memories in an overall view.
The memory banks of all ham radio bands are visible and useable with ease at the same time. Several additional memory banks are available.
Also memory banks with the possibility to save offset, DCS, DEC, ENC and Easycomm-data are available.
The easycomm-data can be sent to another serial port to drive easycomm-compatible hardware like rotors and much more.

- Scanning of single memory banks, there is no need to scan all memory banks at the same time.
Your FT-847 transceiver has only 100 internal memories, which must be scanned all at once.
If you've saved frequencies out of different bands and if you want to scan these memories, you 'll hear a rapid clicking of relais-type-devices in the transceiver.
It is not proved, but we're sure, that continuous long time period scanning, will shorten the life of these relais type devices.

- Wave recording of qso's or other important signals. FT847-SuperControl® has the possibility to record signals either when the squelch has been opened or on other selectable events.
For this feature, a standard sound-card in the computer is necessary.
The recorded data will be saved automatically to a special drawer and can be replayed at any time

- DDE-interface (Dynamic Data Exchange) to satellite-tracking programs (NOVA®, Satscape® etc.)
for Doppler-correction in satellite mode.
The Doppler-corrected frequency will be send to the transceiver, so no manual tuning is needed anymore, when working satellites.
RX- and TX-VFO will be continuously updated with doppler-corrected data.
Of course, possible calculated transverter frequencies will be taken as source for the final calculation of the doppler shift.
So this part is 100% compatible with AO-40 or other super-high frequency satellites. Various possibilities to alter the way to calculate the doppler shift itself are available in the settings.

- EasyComm interface to drive a rotator or other EasyComm-compatible hardware via special memories and the doppler correction function. FT847-SuperControl is able to track a satellite with the Help of NOVA.
Azimuthal and elevational data which is also provided by NOVA, can be sent via another serial port to your Easycomm-hardware. So it is possible to track the satellite perfectly with your az-el antenna-rotator.

- Remote control the FT-847 transceiver via TCP/IP networks possible (also via the internet).

- Full support for the W4RT-Electronics OTT-847 interface. With this interface you can drive automatic antenna tuners from LDG (Supported are the AT-11MP, RT-11 and A-1000, as will be future models).
FT847-SuperControl offers a One-Touch Tune and a No-Touch Tune function. That means automatic tuning without a push of a button! 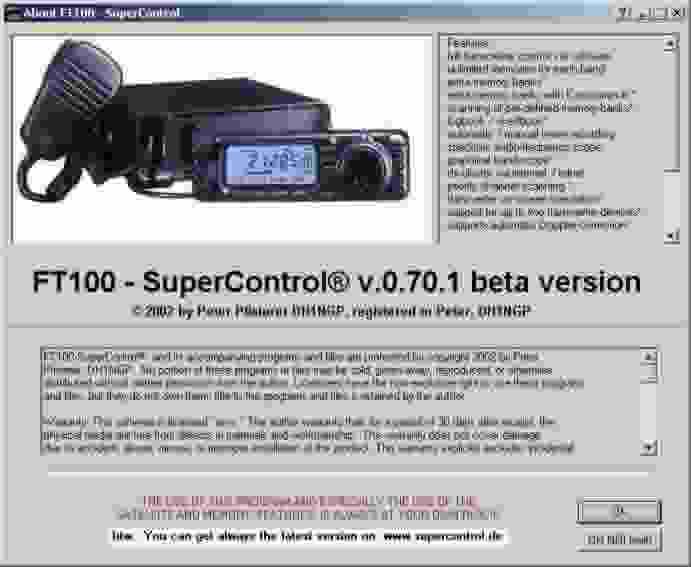 FT100-SuperControl © program features ,-Full transceiver control via buttons in the software.Frequency, mode and other important indications will be p...
£79.96
View details