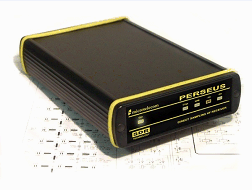 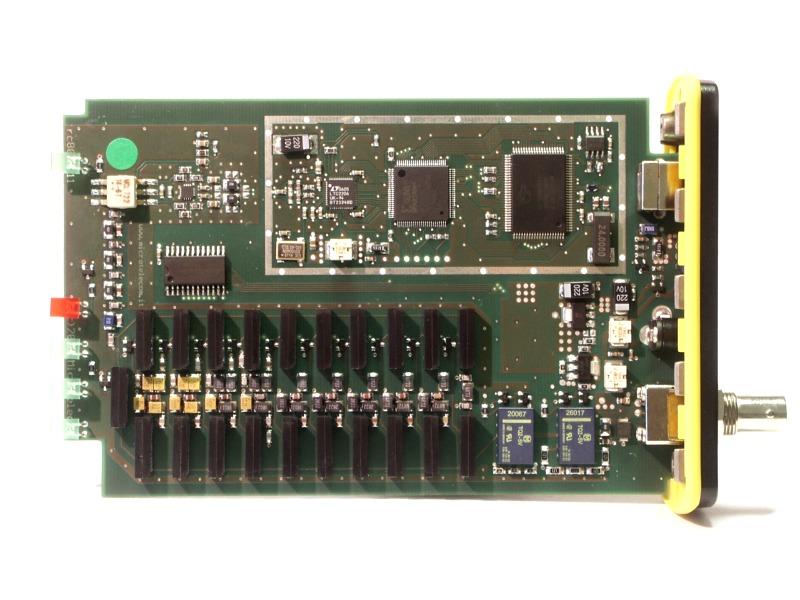 PERSEUS is a software defined VLF-LF-MF-HF receiver based on an outstanding direct sampling digital architecture.
It features a 14 bit 80 MS/s analog-to-digital converter, a high-performance FPGA-based digital down-converter and a high-speed 480 Mbit/s USB2.0 PC interface.
A COMPLETE SDR RECEIVER FOR SHORTWAVES
The PERSEUS analog front-end has been carefully designed for the most demanding users and includes a 0-30 dB, 10 dB steps, attenuator, a ten bands preselection filters bank, and a high dynamic preamplifier with a top-class input third-order Intercept Point of more than 30 dBm. The resulting third-order dynamic range is more than 100 dB in SSB and more than 105 dB in CW.
Believe us, there's no other so performant and complete shortwave SDR receiver in the market today.
The PERSEUS receiver can be operated also in a wide band mode as a 10 KHz - 40 MHz spectrum analyzer with more than 100 dB dynamic range in a 10 kHz resolution bandwidth

Being a software defined radio, the PERSEUS receiver relies on software applications to carry out the demodulation process. Besides providing all the required software signal processing for the PC platforms, the PERSEUS software has a comfortable graphical interface, is simple to use and runs under Microsoft Windows 2000, XP, Vista and Seven (both 32 and 64 bit).
All the controls a listener is used to see on a radio are there, in the application main window. The interface to third party software is provided in several ways, by means of the Microtelecom Software Defined Radio Developer Kit, virtual audio ports and virtual communication ports.

The PERSEUS software supports wideband spectrum record/playback up to 2 MSPS with alias images rejection larger than 110 dB in a 1600 kHz bandwidth!

The latest software release allows remoting a Perseus receiver to any TCP/IP connected location. A standalone server software (included in the zipped package available on the Microtelecom download page) was developed to allow remote connections, supporting unrestricted or authorized access to the receiver.

Based on upload bandwidth requirements, three presets were defined for the server software: GPRS, ADSL or LAN. The client can show both spectral and audio data with bandwidths as low as 80 kbps, or up to 2 Mbps for maximum quality and features (such as local decoding of a DRM transmission caught by the remote receiver or signal demodulation with a third-party software).
Local and remote operation are provided through the same client software for maximum interoperability and user friendliness.

Users can specify whether to appear on the Perseus Servers Map to allow easier connection through a simple point and click on any remote server icon.
FM+ DOWN-CONVERTER

NEW! The FM+ is a 87.5 - 108 MHz broadcast band converter expressely designed for the Perseus receiver. It features a very good dynamic range which perfectly matches the Perseus receiver. The converter is equipped with a control software application suited for FM DXers needs. The FM+ is equipped with an internal antenna switch for direct connection to an HF antenna when the converter is not used.